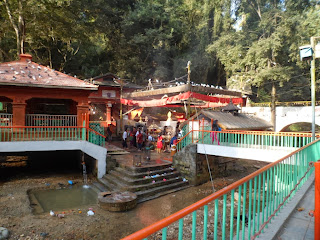 Dakshinkali- the Hindu goddess, Dakshinkali Temple is the oldest, bloodied one of the most famous and popular Hindu Pilgrimages dedicated to Goddess Kali, Scowling, and emaciated, protruding tongue and red eyes with fire and wearing a necklace of skulls, DakshinKali is just another form of the great goddess Durga. There is a saying that Dakshinkali came to existence when she herself appeared in the dream of Malla king, the ruler of the 14th century. Goddess commanded the king to build the temple dedicating to her in a much unknown strange place and should follow immediately. Kali is believed to be extremely powerful and accomplished. Throughout the year there are sacrifices of animals and you can see mostly in Dashain Festival. People are giving sacrifices of animals for their fulfillment of dreams and desires, mainly they sacrifice a male goat, cock, hen, duck, etc. Sacrifices are mainly done on Saturday and also another day like Tuesday and done in front of the temple by Professional local butchers. Tourist cannot enter directly in the temple if he or she is non-Hindu religion. Only Hindu can enter this temple. Tourists are only allowed to take pictures from outside. Saturday in Dakshinkali is just like a cheerful Temple fair, crowded with devotees in their best clothes, women’s are especially in red. The Dark Black stone of Dakshinkali shows her squatting on a corpse, symbolizing victory over time.
It is strong believed in the ability of the goddess to make wishes come true. Mainly lovers, businessman, children, job seekers, etc come to fulfill their dreams
Getting started to DakshinKali:
Dakshinkali has situated 22 km away from Kathmandu valley, on the main track of Kathmandu- Hetauda way (small vehicle way). You can catch it by bus, taxi, bike, or other public and private Transport. Dakshinkali is about a 45-minute taxi ride from Kathmandu. You can hire a taxi and pay a little bit more to the taxi driver to wait while you explore other sites.
It will be more exciting if you go through cycling, this will gets you a lot of fun. Through Dakshina kali way you will get several villages and small cities like Kirtipur, Chobhar, Chanlakhel, Seti Devi, Pharping, etc. From Pharping village it is just 1 km down to the hill.
The road condition is good because it lies on the main way to Kathmandu- Hetauda (Small vehicle) way. The problem is just that it is short not fully wide you have to wait due to uphill all the way. If you plan to go on the Mountain Bike, it is really an interesting place to go and coming back fast is the fun park. The public buses run from the Old Buspark, (Kathmandu), Lagankhel (Lalitpur), and the minibusses leave from Near Martyr’s Gate.
The view around the Temple:
Dakhshinkali Temple is situated in a deep jungle surrounded by hills, when you get to the Parking lot of the Dakshinkali temple, it’s little bit crowded. The route will lead you down a shaded stone pathway, lined by local people selling flowers and offerings for the Goddess.

The land of seven sisters Assam Assam spans the fertile plains of the mighty Brahmaputra. You can choose to spy on rhinos while riding a trained elephant in Kaziranga or

Introduction Places to visit in Nepal are never going to end. As you know that Nepal is a landlocked Country Located in South Asia in the Himalayas. It surrounded by