Rara Lake Nepal- How to Reach Rara Lake from Kathmandu

If you are planning to visit Rara Lake I will suggest you come by Road with your own or reserve a vehicle. For Rara in general, you can come to direct Kathmandu to Nepalgunj from Nepalgunj to Talcha (Mugu) is the most popular and easy route. You can reach the lake after walking for 3-4 hours from the lake. You can also come by public transport but I will not suggest you because there is no direct bus to Rara you have to break the journey and it’s not comfortable. Nowadays, private companies have also started Rara tour packages. Even if you go through that road, you have to walk for 2-3 hours as driving inside the park is prohibited, which is a different kind of fun.

Late in 1963A.D.  When King Mahendra went to Jumla, he walked and observed Rara lake. After that lake become known nationally and internationally. Then in the year 1975A.D., this area was declared a wetland area by establishing a park (Rara National Park. About three years later, Durga Bhanjan Gulma of the Nepal Army has been taking care of Nikunj till now. Since this lake is known through King Mahendra, people know it by the name of Mahendra Lake. 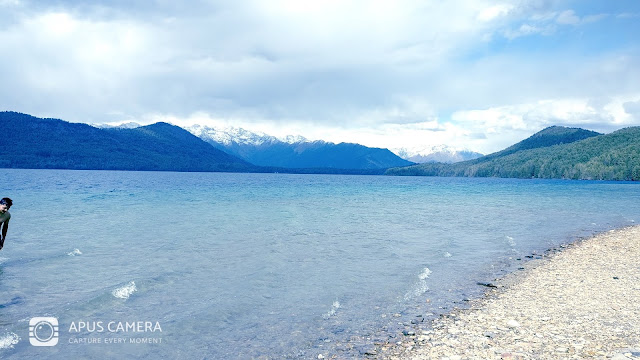 Considered the queen of lakes, Raratal is well known as the largest and deepest lake in the country. The lake is about 167 meters deep, filled with murky and still water. Located at an altitude of 2990, the lake can be seen changing the color of the water 3 to 4 times a day.

According to a park official, the locals believe that the water of the lake is the main source of water from 30-35 small hilly streams and underground instead of a single source. The outlet of Raratal is the Nizar river, which is known as Khatyadkhola as the river flows. 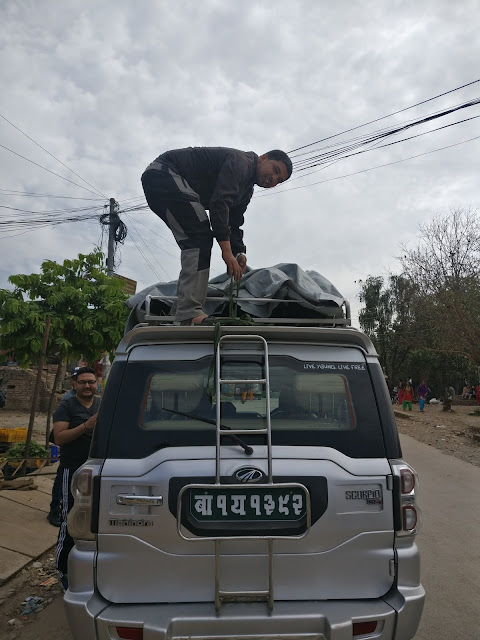 Being Ready for Trip in our Scorpio

As we were in a group of 7 Friends. We hired a travel company Scorpio. Scorpio picked up all of us from our home. Probably the first day of the visit, we all seemed curious. A few hours later, Guruji stopped the vehicle at Naubise for Breakfast.

In Mugling we took our Launch(Breakfast, launch, dinner all was included in our package) local cock and rice after launch we headed to Chitwan. 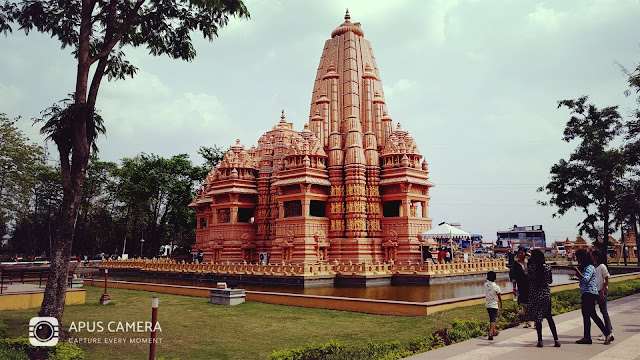 After two hours crossing Narayanghat, we stopped to CG Temple, after visiting the Temple we moved towards Butwal. We did not stop In Butwal and went direct to Kohalpur by crossing the Dense forest and small mountains.

At the Evening We stopped in a luxurious Hotel In Kohalpur. We all were tired so we took our dinner and went to our room. The room was pretty comfortable with AC.

The next morning everyonemm got up, had breakfast in the hotel, and prepared for the journey to Manma(Kalikot). We proceeded from Kohalpur. Surkhet is 86 Km from Kohalpur. Moving on, we stopped at chinch for a tea break. After that, the vehicle stopped at Surkhet. It took 2 hours to reach surkhet from kohalpur. 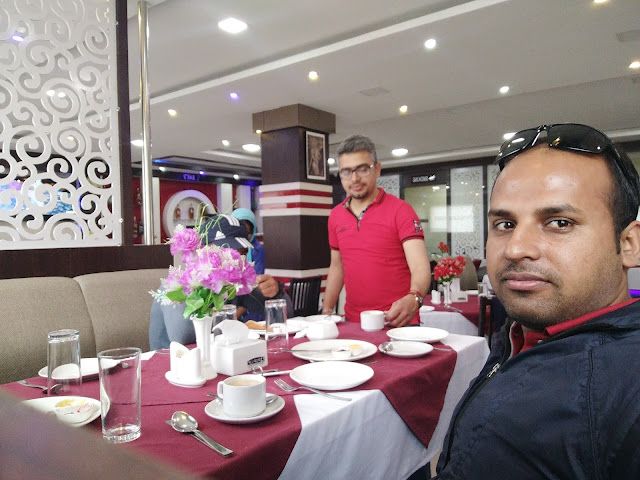 In Surkhet we did a little bit of shopping. Our schedule was to stop In Manma, so we proceeded through Dailekh without delay. Gradually we saw the Guranse forest. Crossing the Karnali River, we reached a place called Paltada in Dailekh and we have our launch. As we were passing through Dailekh across Karnali, we came across a small market called Sherighat. The road connecting Humla from that place was under construction.

After registering our vehicle number at Sherighat police station, we reached Manma, the district headquarters of Kalikot, about an hour’s drive from there. We spent the night in the hotel after visiting Manm Bazaar for a while. There are a lot of things to explore here. 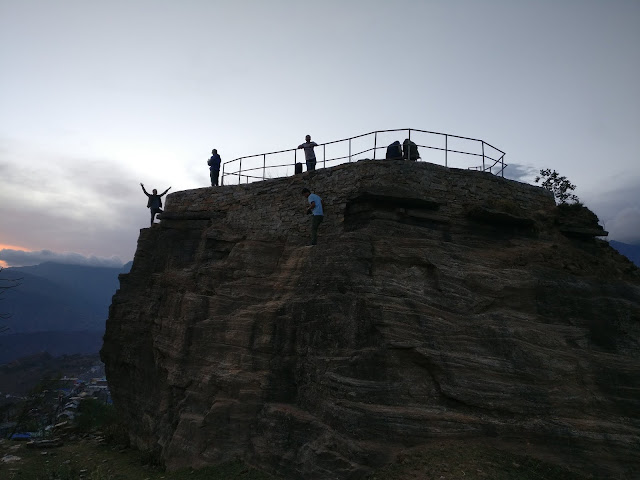 In the first light of the sun, we have our Breakfast and we rotate our seat position and headed towards our destination. Due to the difficult roads of Karnali, the night driving service has been banned there. On the third day, our destination was Raratal. About 10 years ago, the road in Karnali was completed by the Nepal Army. Crossing a steep and narrow rocky road, we reached a place called Nagma, Here we had our Launch and after site seeing, we, headed for the Sinja Valley in Jumla. 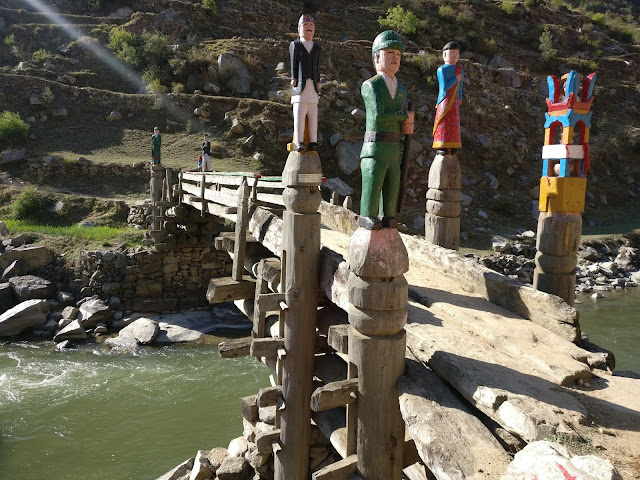 Kathe pool on the way 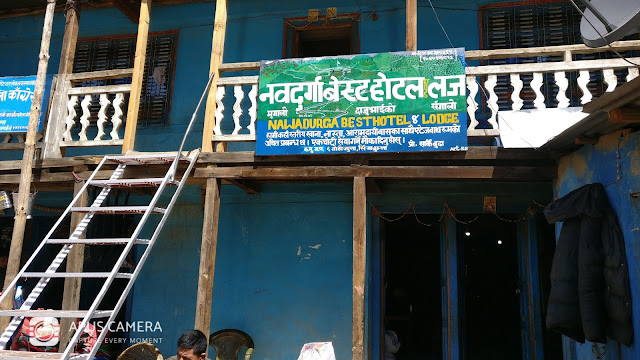 As the journey continued, we had the opportunity to see the origin of the Khas language in Jumla (Sinja Valley). The ancient capital of Jumala Kingdom. As there was a dirt road in front of Nagma, the Scorpio picked it up and took us to Salleri from where driving was prohibited. About 2 hours walk from Salleri to Mirichaur we reached to Rara lake.

We had our booking so we did not have any trouble staying here. At night we have a campfire, with the local goat(Chayangra) and enjoyed in full mood. 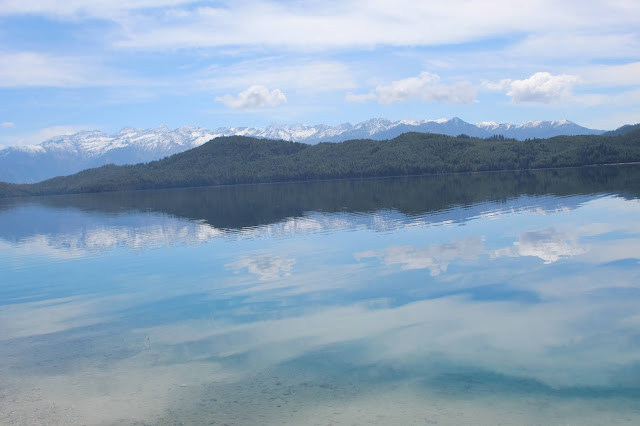 Wow! Rara, it is difficult to separate the nymphs. We were amazed to see the unique gift of nature, Raratal in front of us. Seeing the country’s largest and deepest lake, scattered in the lap of the mountains on all sides, will erase the glimpse of heaven for anyone. When I saw Rara lying in the middle of the forest. As the weather was a bit chilly, we dressed warmly and went through the Nikunj complex to the lakeshore and watched the sunrise from there. Most were busy taking pictures and some were busy capturing photos.

As we were lucky to reach Rara in Nepali New year. There was a fist organized by locals and the lake committee. As there was a little bit crowd We immediately set off for the boat.

After taking a boat ride and taking pictures, we returned to our hotel. 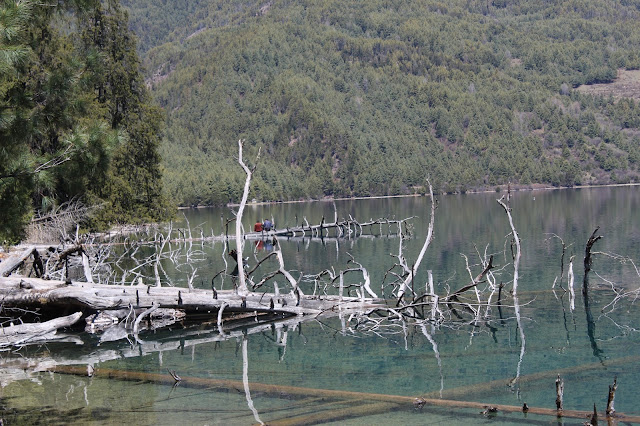 We were planning to go to Murma Top by eating our breakfast. we carried a bottle of water with some food and slowly proceeded towards Murma. While climbing, we could see the different colors of Raratal, which specializes in changing its appearance, and the beautiful view of horses grazing on the grassy ground on the shore

Even though it was getting difficult while climbing the hill, we moved forward very excitedly remembering the whole view of the lake seen from Murma. Along the way, 3-4 types of gurans, red and white gurans (chimalo), and other plants like lekali sallo, dhupi, and dewar were seen. The locals also came to know that there are various wild animals and birds (red panda-habre, fox, bear, scarecrow, tiger) in the park.

After walking uphill for about 3-4 hours, we reached Murma Top (3500 meters). The entire lake could be seen from that height, Rara was no less than a paradise or a nymph, looking like a blue ink splashing in the surrounding forest and at the foot of a mountain. The enchanting view of Rara from there could easily have captivated anyone. It seems that even if it is not heaven, our motherland is a part of heaven.

After some time we decided to come back down to our hotel. 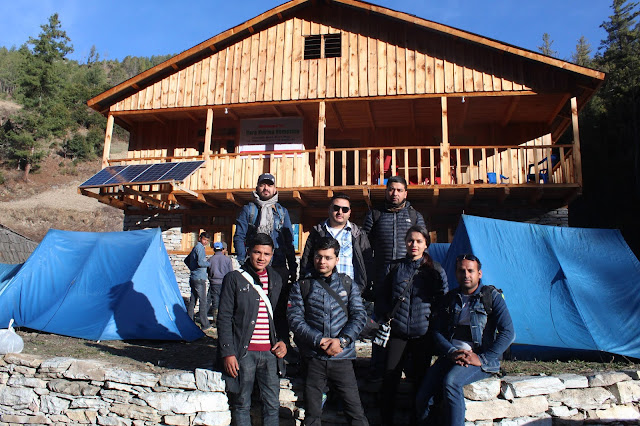 Lodge where we stay

we got up early in the morning, had tea and said goodbye to Rara, and slowly walked away from our destination. Arriving at Salleri, where we had parked our Scorpio, we resumed our journey to Jumla as scheduled that day. we stayed in Jumla, the headquarters of Karnali Zone that day. Even though we were tired after 3-4 days of continuous travel, Jumla Ghumgham seemed to give us more energy. We were very happy to see the valley as most of the land of Karnali is slightly sloping and rocky.

Compared to other districts of Karnali, Jumla, which is smooth, cultivable, has potential, is undergoing rapid development and urbanization, is completely different from what we have heard and imagined. In this place, which is very famous for apple farming, small trees could be seen in the middle of the field. According to the locals, Chumchaur, the highest rice-growing place in the world, is also located in Jumla.

As we had planned to come and stay in Kalikot from Jumla that day, we happily walked around Jumla’s temple, Gumba, and Think for a while in the morning and got on the Scorpio.

On the 7th day, on our way back, we stayed in the same hotel in kohalpur. On the way, we had our launch to Guranse. The best place for sightseeing. 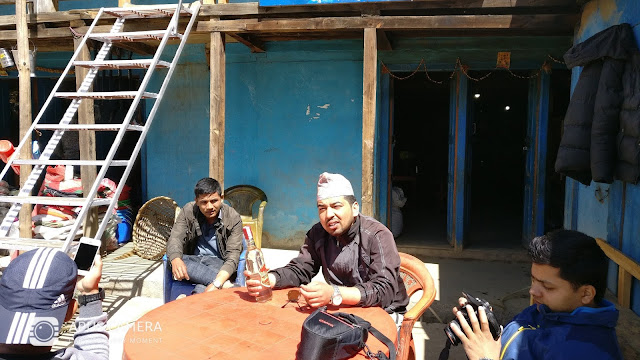 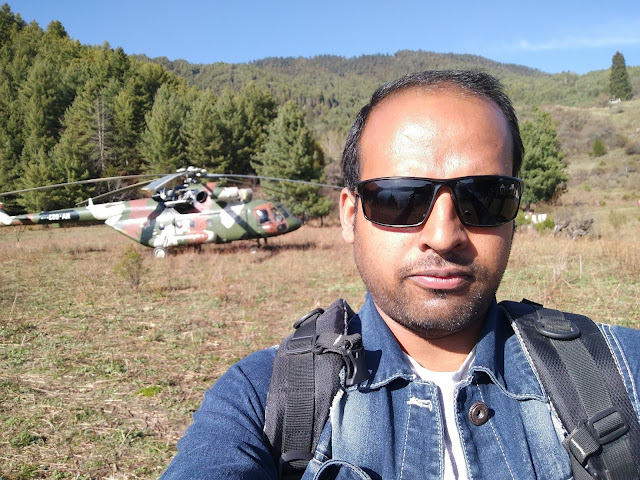 That day was the last day of our journey. So we had breakfast in the morning, got ready for Kathmandu from Hotel, and got on the Scorpio. And relaxing, watching the deep forest of Terai we went back to Kathmandu at Night due to jam in Naubise.

The Top 10 haunted places in Nepal you will experience today, Isn’t it strange? Nepal is full of Natural Resources and Tourist destination Country. Here you can see different-different Natural

The land of seven sisters Assam Assam spans the fertile plains of the mighty Brahmaputra. You can choose to spy on rhinos while riding a trained elephant in Kaziranga or